Was Fiorentina – Inter the Serie A game of the season? 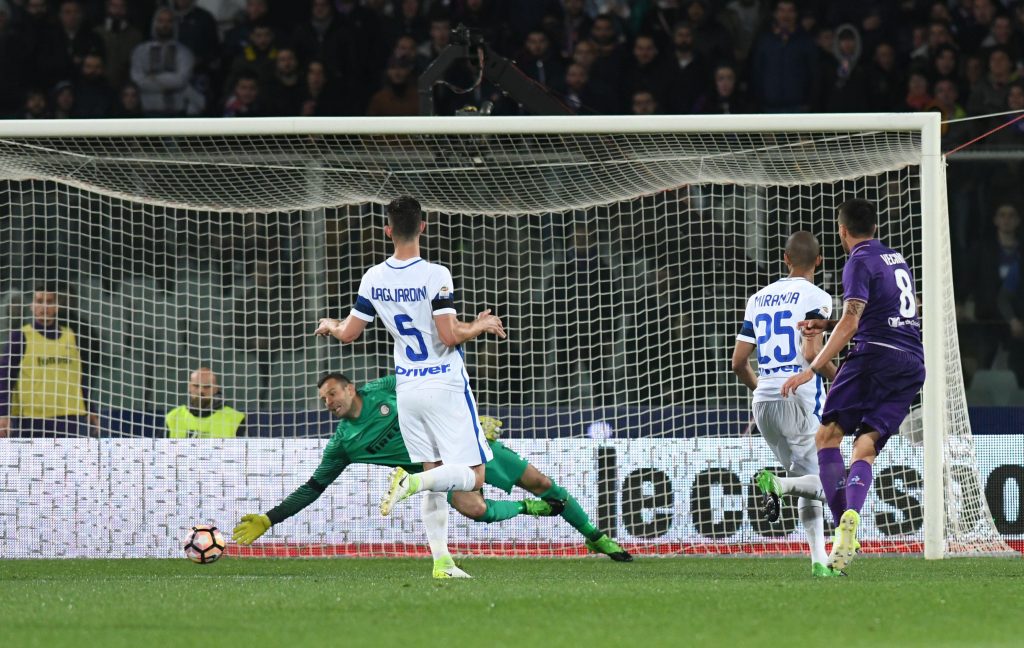 I was only last weekend that Inter dropped two points to AC Milan after a 97th equalizer by Christian Zapata with the game’s last kick. That goal did definitely rule out Inter Milan from the race for the 3rd place and the last Champions League position. After a run of bad form, they had once again managed to disappoint the already disappointed supporters.

This weekend they had the chance to regain some of their previous moment again when they traveled to Firenze to play Fiorentina, who also had struggled with form lately. Both teams entered the match with similar conditions: the last chance to stay in the race for European places and to get a chance to get revenge after last week’s disappointing league results.

The match began with a quiet minute due to the fact that the winner of 2011 Giro d’Italia Michele Scarponi, who would have seen the match in place, died of an accident during training the same morning. The Fiorentina fans refused to have any tifo in the first half to honor a supporter who died in Lisbon in connection with Friday nights match between Benfica and Sporting CP.

Inter started aggressively and Roberto Gagliardini and Antonio Candreva were the first to get the chance to test the Fiorentina goalkeeper Ciprian Tatarusanu. However, the home team started to pick up pace. Which created good opportunities for both Borja Valero and Hrvoje Milić who managed to waste a good chance by not deciding to finish nor to pass the ball.

Fiorentina’s pressure eventually paid off with when they took the lead 23 minutes into the match, as Milic was more determined and played to Matias Vecino who broke through the Inter central defense and scored to make it 1 – 0. Inter, however, immediately responded with a goal within five minutes by Ivan Perisic who interacted nicely with Candreva. Another six minutes later the away team took the lead when Joao Mario’s dipping ball reached Mauro Icardi who managed to put it in behind Tatarusanu. Inter were also close to scoring another goal, but thanks to a fine save by the home keeper it was 1-2 as the referee blew the half-time whistle.

Already in the 52nd minute, Fiorentina was given a chance to equalize when Danilo D’Ambrosio caused a penalty. The penalty was taken by Federico Bernardeschi but the Inter keeper Handanovic saved it.  But about 10 minutes later, the home team recovered and manage to score 2-2 by Davide Astori and only one minute later, took the lead thanks to Vecino’s second goal. After this, an Inter completely collapsed and Khouma Babacar could easily make 4-2 after 70 minutes, and about ten minutes later, the Senegalese striker took advantage of Carlos Salcedo’s play, making it 5-2 to the home team. However, the audience at Artemio Franchi could not lean back right yet. Inters team captain Icardi did not see the game as over and by two goals within three minutes he brought Inter back into the game and also had a chance to score his fourth and Inter’s fifth goal at the very end but the home team managed to keep the lead and win this very entertaining game with 5-4.

Other interesting results this weekend was Atalanta’s 3-2 win at home to Bologna, which boosted their chances of a place to next year’s Europa League and Juventus 4-0 win at home to Genoa, putting them 11 points ahead of second places Roma in the table. Juventus center back Leonardi Bonucci scored a very beautiful David Luiz-esque goal, bringing the ball from his own half up to the Genoa penalty area, finishing with a great strike in the top corner. Next Saturday night we will see Atalanta and Juventus playing each other, in which in advance looks to be a great game. Find the odds for that game and the other’s here and place your bets on next week’s Serie A action.