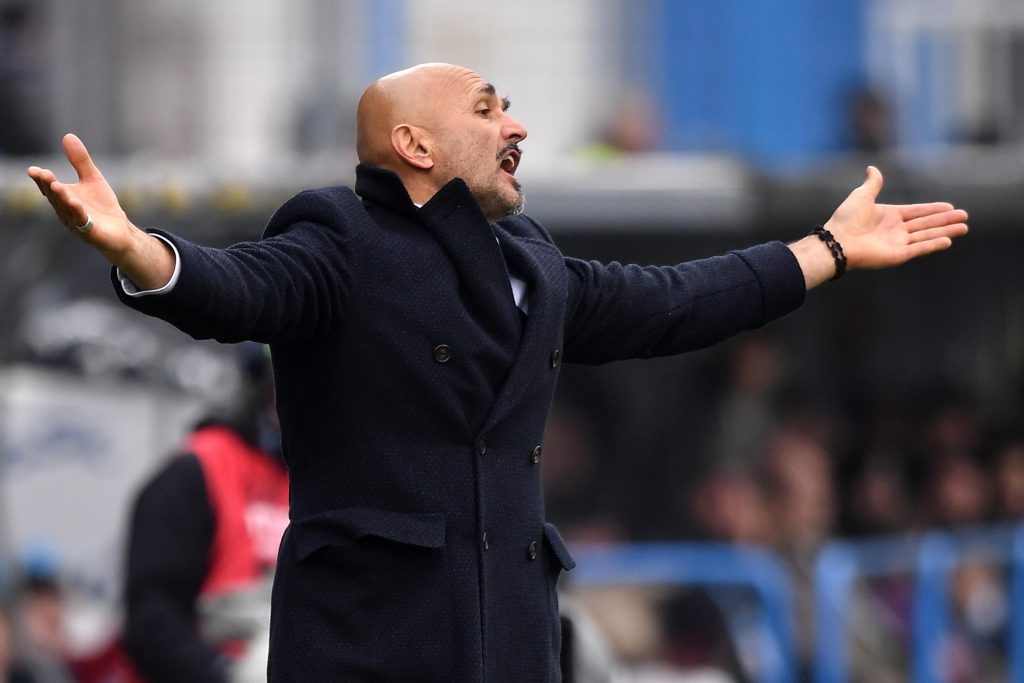 At the beginning of the season Luciano Spalletti revealed Inter had made him a number of promises. If the club broke them, he vowed before the journalists in the room that they would be the first to know. It put Inter on notice. When Spalletti wants to say something, he says it. Venting is what he does.

Inter must have known that from following what happened at Roma last season. The Tuscan would roll up to a post-match interview and be so brutally and provocatively honest as to leave the studio completely stunned. Sunday night was another such occasion.

Inter had just brought Napoli to a halt at San Siro. In hindsight maybe it shouldn’t have come as a shock. Spalletti has a great record in big games this season. He also seems to have Maurizio Sarri’s number. Inter held his Napoli side to another 0-0 at the end of October. Still, the result came as a pleasant surprise considering how poorly Inter have played since mid-December. In that time they have won just twice in 12 games, and even those wins were unconvincing against relegation threatened Benevento and Crotone.

The Napoli result was cause for some optimism, then.  You could spin it as Inter recapturing the spirit and togetherness that had propelled this team to the top of the table just 10 days shy of Christmas. Spalletti, however, was having none of it and evidently wished to make a point. “We lack quality,” he said. “You say we’ve got it. Napoli have it. We don’t… We’ve never played great football”

Massimo Ugolini, Sky’s sideline reporter, protested. Does Mauro Icardi not have quality? In Spalletti’s eyes, Ugo had missed the point but indulged him nonetheless, outlining what Icardi is in order to highlight what he isn’t. “Mauro is a great striker,” he said. But here’s the thing. “A quality player comes short and plays with the team, beats a man, dribbles… If we’re talking about goals and the job a striker does in the penalty area, he has great quality. He’s a goalscorer.”

Spalletti hadn’t come out to dress down Icardi. His argument was general. For instance, he lamented the fact Inter didn’t have the quality to play out from the back and elude Napoli’s press. “Often we pass it back to the goalkeeper,” he said. “Too often.” There was frustration at the lack of consistency. How for every one ball that isn’t on – which Inter still improbably manage to make something of – there are three easier ones they somehow cock up. Opportunities go to waste.

“What you say about Sarri and Napoli is true” Spalletti said, contrasting their quality with Inter’s lack thereof. “If they had got into the same 5 or 6 situations we did, it would have ended badly.” Napoli, he argued, would have definitely made more of them and capitalised. Because when the spaces tighten up in the final third and a sense of invention, some quick thinking or a moment of genius is what’s required to make the difference, and Inter just don’t have it.

Elements of this are nothing new. Spalletti made it clear from early in the campaign that the team needs to play quicker, take fewer touches and combine better. But for all the work he has done in training, the same issues continue to afflict Inter. As such the 59-year-old was hardly about to get all excited by Sunday’s result.

In the Sky studio, Luca Vialli was left with the impression Spalletti can’t do anymore with what he’s got. He sensed a degree of resignation about it all. Rather than that, Spalletti seems to have arrived at a begrudging acceptance of his lot. He is one of the most innovative coaches in the game. An outside-the-box, left-field thinker, capable of reinventing players. Which perhaps proves his point.

If Spalletti can’t find an X factor in this team as he did at Roma by changing Perrotta, Totti and Nainggolan’s positions maybe it’s because the underlying quality isn’t all that great and the squad available to him is too one-dimensional. You may recall Spalletti was declared Inter’s best signing at the end of the summer transfer window. Not a player.

It now looks as though he overachieved by going unbeaten in Inter’s first 17 games of the season. Then just like two seasons ago they folded at the first sign of adversity. Groundhog day. And given Inter have been through five managers in the meantime one conclusion to draw is their problem runs so much deeper than the guy on the bench. The character of the players, old and new, continues to be called into question. Confronted with Spalletti’s comments, Antonio Candreva was convinced they were just a ploy to motivate the team. “He can think that,” Spalletti said.

By pointing the finger at what he perceives to be a lack of quality, Spalletti clearly also has management in his sights for promises unkept and inadequate recruitment. Inter wasted huge amounts on Geoffrey Kondogbia, Gabriel Barbosa and Joao Mario at a time when new owners Suning were willing to make a splash and weren’t constrained by a change in political circumstance in China. We might as well add Dalbert to that list and pause to remember that Lazio acquired Stefan de Vrij, Sergej Milinkovic-Savic, Luis Alberto and Ciro Immobile for the price of Gabigol.

Of course, the strategy deployed by Spalletti is not without significant risk. Recent history tells us that Inter’s dressing room finds it easier to fall out than come together. Eleven games remain of which only four are at San Siro with Juventus still to visit. Make it five if you include the Derby della Madonnina against a Milan side that boasts double the points Inter have in 2018. The gap between them and their cugini is down from 18 points to just five. This weekend Inter go to Samp, who have been close to perfect at Marassi all season. Then come trips to Torino, Atalanta and Lazio on the final day.

The fixture list is pretty daunting, it demands the utmost realism and explains why a strand of Spalletti’s spiel was essentially about expectation management.  Inter raised them with a long series of fine results at the start of the season. The papers kept them high in both transfer windows, linking Inter with players they were distinctly unlikely to sign, deluding Spalletti and the fans. For Spalletti, keeping everyone’s feet on the ground has been much less of an issue after coming crashing back to earth over the last three months.

On Sunday, it entered a new phase. Spalletti was effectively saying don’t be fooled into thinking everything is suddenly OK again. It won’t be even if Inter do accomplish their goal of qualifying for the Champions League. A rebuild is in order. Yes, another one.