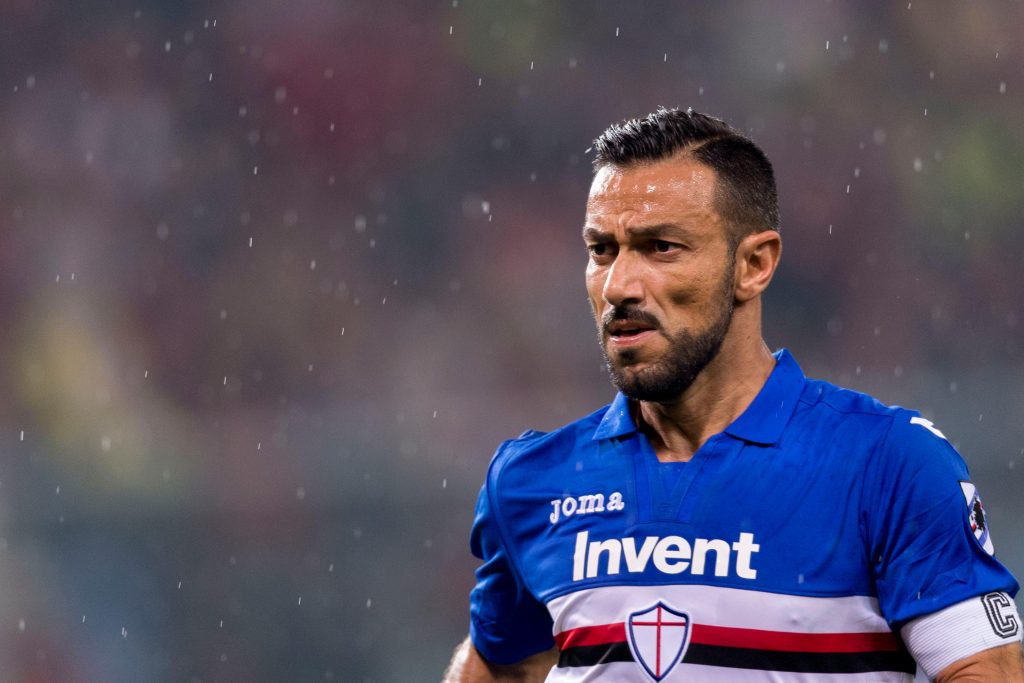 Before Sunday’s game at the Ferraris, Samp were obliged to comment on the future of striker Duvan Zapata. Over the last week there have been reports that Borussia Dortmund intend to bid for the Colombia international in the event Pierre-Emerick Aubameyang completes his move to Arsenal. “There’s nothing to that story,” Samp’s sporting director Carlo Osti said. “We want to keep this group together until the end of the season. Then we’ll talk about it.”

If Dortmund did send a scout to Marassi this weekend to follow Zapata up close and personal, they would have been disappointed. Marco Giampaolo left him out of the team for Fiorentina’s visit to Liguria. The 26-year-old got married over the winter break and there was the suggestion that, while he trained well on reporting back for training at Bogliasco, he’d also let himself go a little. The late nights. The wedding cake. So Zapata sat this one out.

But great centre-forward play was not lacking. It’s often the case that a scout goes to a game and leaves more impressed with another player than the one he was sent to see. It’s just a shame Fabio Quagliarella turns 35 at the end of the month. The hat-trick Samp’s captain scored was a significant one – and not only because it clinched three points against a rival for a place in the Europa League.

Quagliarella is now on 15 goals for the season. At his age, you’d expect his powers to be waning. But with 18 games to go the Neapolitan has already achieved a new personal best in top-flight football. The only time Quagliarella has ever had as prolific a league campaign as this one was nearly 15 years ago when he was playing in the third division with Chieti.

I can’t be the only one to whom this comes as a bit of a surprise. His reputation for being a scorer of fine goals, rather than a fine goalscorer is true to a point. Quagliarella has consistently got into double figures. But he has always been closer to 10 goals than 20. What, then, has changed? The league itself is a good place to start. When Quagliarella first emerged on the scene at the turn of the century scoring 20 goals a season, let alone 30, was a rarity. Now everyone’s doing it.

Three years ago, when Luca Toni became the oldest player since Dario Hubner to be crowned Capocannoniere, it was clear the then-Verona striker did not value that goalscorer title as highly as the one he won at Fiorentina in 2006. There was a shift going on in Italian football, Toni said. The emphasis was no longer being placed on defence. He enjoyed more space than ever before. And the standard of defending was below the standards Toni had come to expect in the `90s and early to mid-2000s.

There is an element of that with Quagliarella. It also helps that he plays for a team as expansive as Samp. Zapata’s presence up front means Quagliarella has someone to pin defenders back and do more of the dirty work than Luis Muriel. Having a No.10 like Gaston Ramirez pushed up in support has greatly benefited him too. The Uruguayan was involved in all three of Quagliarella’s goals on Sunday.

Older, wiser and more mature, Quagliarella plays as if there are no more secrets left for the game to tell. There’s little he has not seen. He always scores against his former clubs regardless of the fact they know him so well. It’s nothing personal. Quagliarella does it to everyone. For instance, in December SPAL became the 36th different team in Serie A to have conceded a goal to Quagliarella. He is nothing if not indiscriminate.

Statistics like that encourage you to think Quagliarella has scored more goals than he has. His talent has the same effect. How is it that someone capable of pulling off some of the most difficult finishes in the game had never scored more than 13 goals in a season until this year? It beggars belief. Or does it?

We now know Quagliarella’s talent was suppressed by the anxiety caused by a stalker who threatened his life and fabricated a story that, allegedly, prompted hometown club Napoli to sell him.  It went on for years and only reached its resolution in the spring. When you read in detail about Quagliarella’s ordeal it’s remarkable he’s scored as many goals as he has done. It does make you wonder what might have been had his mind been clear of this trauma. Maybe that’s now what we’re seeing.

Still, Quagliarella has had a fine career. Of that there is no doubt. Jose Mourinho famously invited him into Inter’s dressing room after Udinese played at San Siro one day and told him to get used to it because that’s where he’d be getting changed next season. It was a measure of how highly the Special One thought about him. In the end a move to Inter never materialised, but one to Juventus did. Not once, but twice. It speaks to the trust they had in him. The professional they recognised. Quagliarella won a Scudetto in Turin, an experience he’ll cherish. And it takes on an altogether different significance when you factor in the fact he was being terrorised at the time.

Now those worries are behind him, you can’t help but smile on seeing him flourish and enjoy his football under Giampaolo, who he knew from a spell at Ascoli many moons ago. Sunday’s goals took Quagliarella level with David Trezeguet and Samp legend Gianluca Vialli in the record books of Serie A goalscorers. Currently the most prolific player still active in Serie A on 123, there could have been more. There will be more. At least that’s what Doriani hope. Samp fancy Quagliarella to do for them what his former teammate Toto Di Natale did for Udinese in his late `30s.

“At his age you might reasonably expect him to ration his energy,” Giampaolo observed. “Instead he runs around like a 20-year-old.” It’s great to see.

“I got goosebumps when the Gradinata Sud sang my name,” Quagliarella said. “The emotion I felt was incredible. As footballers we live for this. Unforgettable days that stay with you forever.”

Make no mistake, Quagliarella savours them more than most.