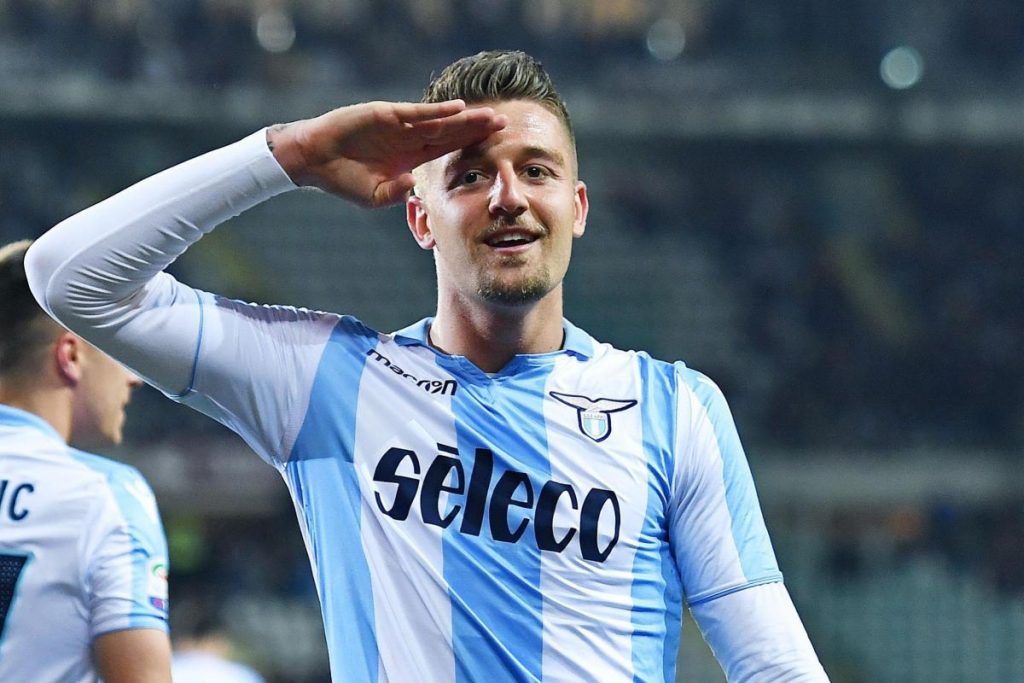 Slavisa Kokeza was concerned. The president of Serbia’s football federation did not want a repeat of what happened with Marko Arnautovic. The West Ham striker is of Serbian descent but chose to play for Austria, the country where he was born. To Kokeza it felt like a missed opportunity. He didn’t wish to have the same regrets about Sergej Milinkovic-Savic in the future.
The Lazio midfielder could, in theory, have played for Spain. He was born in Lérida while his father Nikola, a journeyman footballer, was playing for the Catalan city’s football club. It’s why his surname is double-barrelled in the Spanish tradition.
Now 23, Milinkovic-Savic is one of the hottest properties in European football. You’ll no doubt have seen the speculation linking him with moves to Real Madrid, Manchester United, PSG and Juventus. You’ll have heard about Lazio demanding €150m.
Which makes it all the more interesting that Sunday’s game against Costa Rica was Milinkovic-Savic’s first competitive outing at senior level. He played absolutely no part in qualifying despite winning the Euros with Serbia’s Under-19s, the World Cup with the Under-20s while also distinguishing himself as the most talented midfielder Serie A has had since Paul Pogba left two years ago.
It was the cause of considerable consternation in Italy that Milinkovic-Savic apparently wasn’t good enough to play for his country. How could Serbia overlook a player they believe to have everything. While Milinkovic-Savic never gave the impression of wanting to play for Spain and the RFEF never received any encouragement, the risk remained. The situation did not look likely to change as long as Slavoljub Muslin was in charge. His disregard for Milinkovic-Savic was reported as a factor in his dismissal last November. The reasons Muslin thought better of calling him up have never been clear. Tactical explanations were offered. But they didn’t hold weight even if Milinkovic-Savic has an unusual skillset and looks at his best on the side Nemanja Matic prefers.
It was exasperating for Milinkovic-Savic and his entourage. Nikola didn’t think it were possible for Muslin to leave his boy out after the Serbia manager attended Lazio’s 3-1 win against Nice in the Europa League last October. Milinkovic-Savic set-up Felipe Caicedo’s opener before scoring twice. It was a jaw-dropping performance. But when the next Serbia squad was released, Milinkovic-Savic’s name wasn’t in it.
Things are different now under Muslin’s former assistant Mladen Krstajic. A side already rich in skill has a higher ceiling because of it. When defenders are not bouncing off Milinkovic-Savic, he is beating them with razzle-dazzle. As a boy, he idolised Zidane and the balletic roulettes the Frenchman was famous for are a regular feature of his game. The ‘Zlatan of midfielders’ tag is not so far-fetched when you consider Milinkovic-Savic’s combination of physicality and finesse. At 6’4, the genes of his mother, Milana, a former professional basketball player with Jugoplastika in Split, are obvious and Lazio feel no shame in going direct, hitting long balls up to him knowing he’s able to bring the ball down and wreak havoc.
Serbia’s win against Costa Rica would have been more comfortable had Aleksandr Mitrovic taken the chances Milinkovic-Savic served on a plate for him. More will come against Switzerland in Kaliningrad on Friday in a game that was billed as a play-off for a runner-up spot in Group E before the start of the tournament. Serbia may well fancy their chances of topping it against Brazil, the team Milinkovic-Savic beat in the Under-20 World Cup final, if they prevail today.
On paper, Serbia have more match-winners than the Swiss. Mitrovic went into the tournament as one of its in-form strikers and Milinkovic-Savic isn’t the only one furnishing him with opportunities. Only Joshua Kimmich assisted more goals than Dusan Tadic in qualifying. As for Adem Ljajic he blows hot and cold, but when he’s hot he makes defenders sweat big time.
A goalscorer like Mitrovic is principally what the Swiss lack. But as was abundantly clear in qualifying, when Vladmir Petkovic’s experienced, street-wise team won all but their last game, this is a feisty side – just ask Neymar and his right ankle – that’s greater than the sum of its parts. Whether Krstajic is as skilled in blending this team together as he is in distilling Rakija remains to be seen.
Selecting Milinkovic-Savic is a good start. It was about time Serbia’s head coach got the message about SMS.
By James Horncastle
About
admin