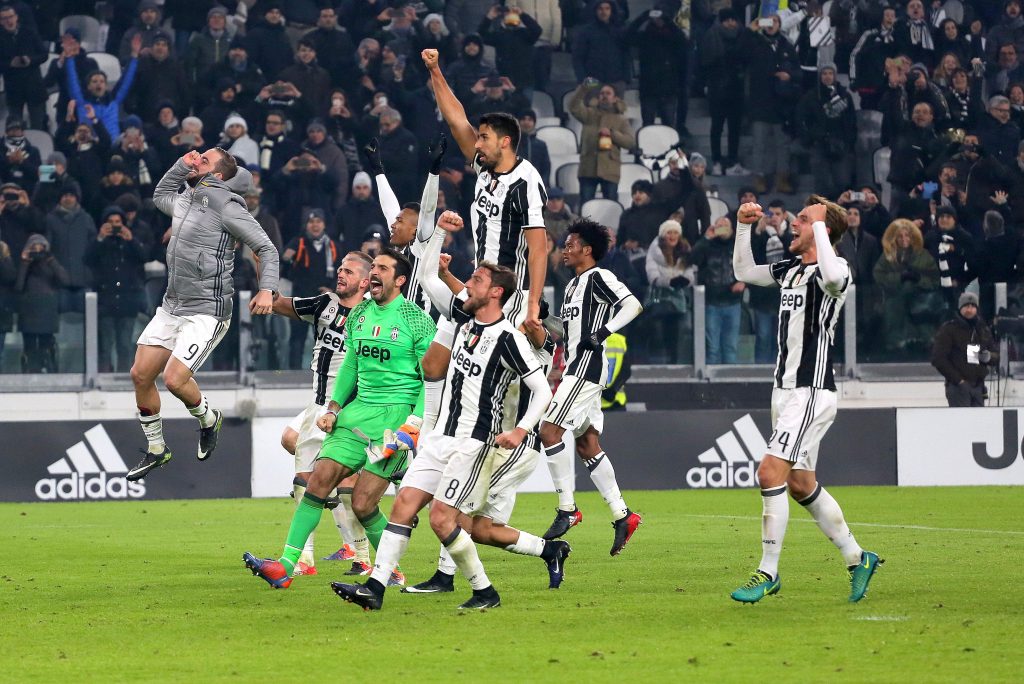 Juventus will, as we already knew, celebrate Christmas as league leaders and a lot indicates that they will clinch their sixth consecutive title after winning 1-0 against Roma on Saturday night. Juve, who has struggled away from home this year welcomed Roma to Juventus Stadium on Saturday night and it turned out to be a very intense battle that included eight yellow cards (3 for Juve and 5 for Roma) but only one goal.

Roma had been in great shape ahead the game and have really threathened Juventus in the league top. Ahead of Saturday’s series finale it is only four points between them and the ‘Old Lady’ – a victory this weekend would really have brought extra thrill to the title race. But it was Juve and their club record signing Gonzalo Higuain that scored the only goal of the game and that means that Juve extended their lead to seven points.

With Juve alone at the top, the top race will most likely be for the remaining two Champions League places for the second and third placed teams of the table. In addition to Roma; Napoli, Lazio, Milan and the surprise package Atalanta are the main contenders for these spots.

The Serie A continue with a round of games on Thursday night and then goes on Christmas break until the 7th of January.  A team that goes into the break with a much more positive feeling than they had just a couple of days ago are Palermo. The pink shirted Sicilians took a crucial win away to Genoa after losing nine consecutive matches prior to this game.

The game at Stadio Luigi Ferrari in Genua was only four minutes old, when the young Genoa forward Giovanni Simeone found the top corner, after the two matches without scoring. Genoa continued to press, but was disturbed when Miguel Veloso had to leave the pitch after a red card. Just before half time proved the referee showed good sense when he let Robin Quaison continue to play even though he was alone against four-five Genoa defender. Somehow he managed to dribble his way through the porridge and put the tying goal at 1-1. A real class goal!

Palermo had the position to take the lead in the beginning of the second half, but Ilija Nestorovski did not manage to push the ball under the bar. Instead,”El Cholito” Simeone could score his second goal, meaning 2-1 after a nice cross by Armando Izzo. After that Simeone assisted Nikola Ninkovic to 3-1, the match seemed settled, especially considering Palermo’s miserable record of nine straight losses. But in football anything can happen and the away team proved it. Alessandro Diamanti had barely come onto the pitch when he assisted Edoardo Goldanigo to 3-2. After 88 minutes, Diamanti hit the corner kick that eventually found its way to Andrea Rispoli who scored 3-3.

And that was it? Of course not! When the clock showed 90+ minutes, Palermo kept pressuring and eventually Aleksandar Trajkovski managed to finish the turnaround by scoring 4-3 to Palermo which ended up being the end result in one of the most entertaining matches of the season. Was this a lucky fluke or will it be a turnaround for Palermo’s so far miserable season? On Thursday night they play fellow strugglers Pescara at home. Another win there and they can celebrate Christmas in peace on Sicily. Find all odds here!