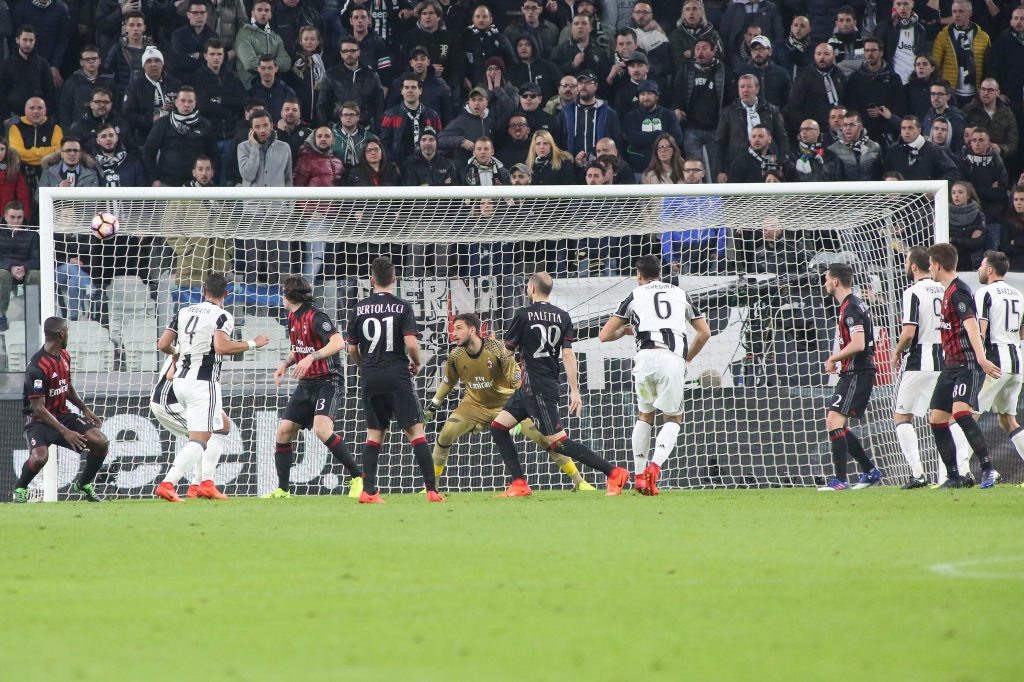 It was a round without any draws in the 10 games played in this weekend’s Serie A football. The matchday started early with an exciting battle between the two giants Juventus and Milan on Juventus Stadium on Friday night. Juventus have been followed with rumors about the coach Max Allegri leaving at the end of the season, potentially to Arsenal, with the Roma coach Luciano Spalletti being heavily rumored to be his replacement come next season.

However, the turmoil didn’t seem to affect their performance in this exciting match. The match began at a high speed and Marko Pjaca, who came in late in the starting line-up got the first opportunity, but Gianluigi Donnarumma was quickly down and saved the Croatians attempt. A few minutes later it was Pjaca again who came close to score a leading goal, but this time he shot wide. After the two missed by Pjaca, Juventus took the lead after half an hour of play when Dani Alves nicely passed the ball to Mehdi Benatia who was onside and managed to score the 1-0 goal. After the goal, Milan took over more and more and managed to equalize after Gerard Deulofeu´s pass to Carlos Bacca who tunneled Gianluigi Buffon and made it 1-1.

Juventus took back the command of the game again at the beginning of the second half. Pjaca and Khedira both came very close to giving Juventus the lead. Donnarumma had to make a series of sweaty saves and the sweatiest one was perhaps Mirjalem Pjanic ´s shot, which he managed to steer up into the crossbar and out. The Juventus pressure decreased a little during the next part of the game and it looked to end as a draw.

During the additional time Milan’s playmaker José Sosa sent off for a second yellow card and Donnarumma looked to rescue a point for Milan when he made yet another magnificent save during the game´s last minute, but just seconds after the rescue, Stephan Lichsteiner crossed the ball on the Milan defender Mattia De Sciglio´s arm and Juve get a penalty that Paulo Dybala scored confidently. Despite being saved by a penalty at the end, the win was really well deserved for Juve, who are now 8 points clear with 10 games still be played.

Another more surprising result from this weekend’s play happened when this year’s surprise package Atalanta traveled the 40 minutes from Bergamo to Milan to play Inter, who have looked strong recently under the management of Stefan Pioli. Sitting in 5th position and having won their last away game to Napoli, the Atalanta players were filled with confidence as they entered the Giuseppe Meazza Stadium on Sunday afternoon.

However, the game turned out to be an Argentinian night, with Inter’s two compatriots Ever Banega and Mauro Icardi set the tone for the match. With three goals each, they contributed to the somewhat surprising 7-1 win for Inter. A real trashing and not what Atalanta expected from the match. This weekend they have a good chance to get an early revenge as bottom placed Pescara visit them in Bergamo. Inter will take on Torino in a tough away game, where a win is crucial if they want to catch Napoli in third place and claim the last Champions League place for the next season.