Higuain the hero as Juve expand their lead 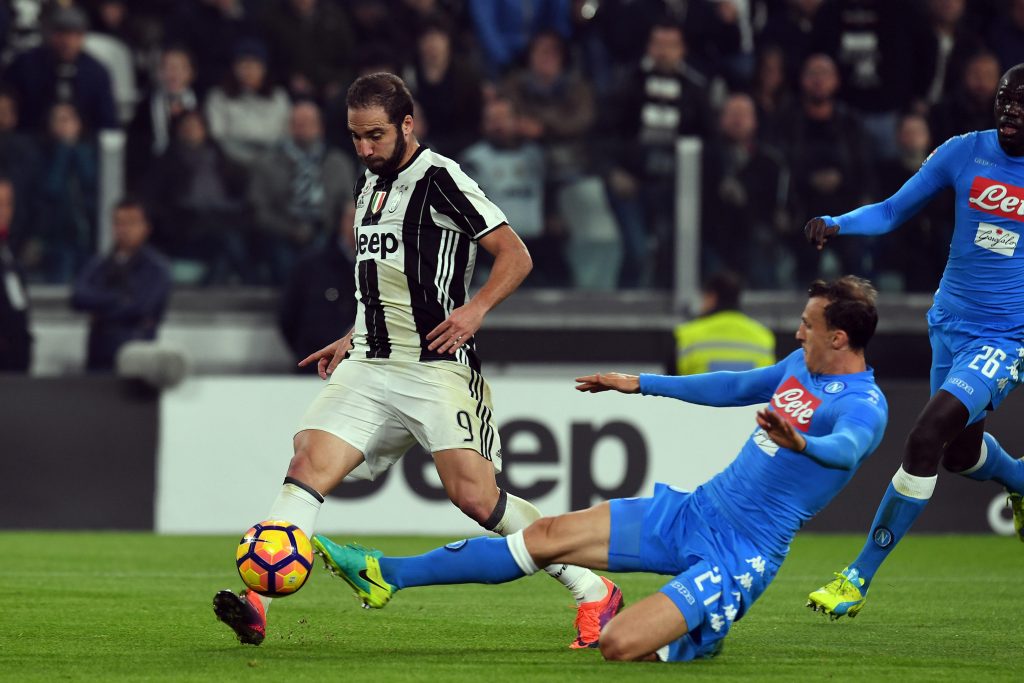 On Saturday night, we saw one of the most interesting matches of this year’s Serie A season so far. First placed Juventus played Napoli, who were in second place before the game, at home on Juventus Stadium in Turin. 50 minutes into the game the home team took the lead through a goal scored by the centre back Leonardo Bonucci. Just four minutes after the visitor’s Spanish winger José Callejon equalised the score. But in the 70th minute this summer’s record signing Gonzalo Higuain, bought by Juventus from Napoli, scored 2-1 which ended up being the final score of the game. The €90m Juventtus paid for his services this summer so far looks well spent with Higuain scoring 7 league goals, including a number of winning goals. Juventus are now in the lead with four points ahead of second placed Roma, whereas the loss on Saturday pushed down Napoli into 5th place.

As we have previously reported about, Inter’s coach Frank de Boer had to win the away game against Sampdoria, but the Nerazzurri didn’t manage to leave Genua and Stadio Comunala with any points this time, after Fabio Quagaliarella got the only goal for the home team Sampdoria in the games 44th minute. The loss put Inter in 11th place, only seven points off relegation and the odds on de Boer to still be in the job come Christmas are right now very high. Despite big signings such as the Argentinian playmaker Ever Banega from Sevilla and European Championship winner Joao Mario, the Milan club are struggling to get the team to work together as a unit on the pitch.

The upcoming round of play will be the last one before the international break coming up next week. There are some interesting matches to be played including league leaders Juventus at Chievo and the top match between Lazio and Napoli, who are both chasing the other top teams from their fourth and fifth position in the table.

But before the weekend, there are a couple of teams in the Serie A that are due to play European football in the Champions League and Europa League. Napoli quickly has to recharge from the weekend’s loss and get ready for their game against Besiktas, away in Istanbul this Tuesday. Being top of their group on six points after three games, a win for the Italians would certainly but them in a very good spot ahead of the continuation of the campaign. After losing the first game to Besiktas at home by 3-2 they are surely in the mood for a revenge. Also Juventus have an exciting match to look forward to as they play Lyon at home. A win in that game and “The Old Lady” have secured their place in the playoff stage.

In the Europa League, four Italian teams are playing on Thursday night. Sassoulo takes on Rapid Wien at home, Roma travel to Austria in order to play Rapid’s local rivals Austria Wien and the troubled Inter play away to English Southampton. The last Italian team to play are Fiorentina who play Czech side Slovan Libarec at home. Just like Juve, Fiorentina need a win to move on to the next stage whereas the other three Italian teams still need to fight for their survival, with Inter trailing the most being the last placed team in their group.