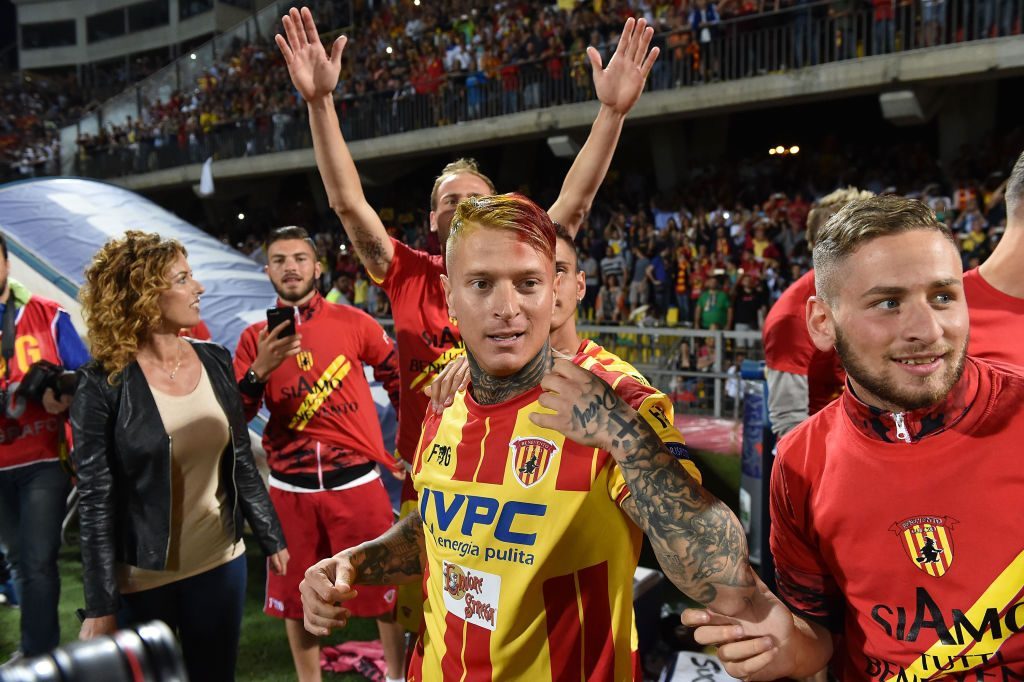 And now the end is near. Wednesday night could be it for Benevento. If Europa League chasing Atalanta contrive to inflict a 27th defeat in 33 games on them and in-form SPAL or escape artists Crotone manage to win, the team from the Sannio will unfortunately be one and done in Serie A.
Honestly, the heart breaks. For all the ridicule Benevento have attracted over the last eight months, this team stands out as molto simpatico. It’s impossible not to like them.
When they go down, people will smile. Not out of any sense that Benevento have got their comeuppance. No one will take pleasure in their relegation. But the memories this team has made over the course of their first ever Serie A campaign are enough to make us look back on their [mis]adventure with affection. From clinching their first ever point in stoppage time with a goal from goalkeeper Alberto Brignoli to Cheikh Diabate’s burgeoning reputation as one of the great January signings.
It’s enough to recall the words of Bacary Sagna on joining Benevento in February. “In an era when football has become more of a business than an actual sport, Benevento represents the heart and soul of what a football club should be about. Passion, heart, hope, joy, love and a philosophy that is aligned to my own outlook on life.”
Take the last fortnight for instance. Benevento twice came from behind against Juventus. They even had the chance to go 3-2 up at the Vigorito before the game got away from them in the final quarter of an hour. And on Sunday, Roberto de Zerbi’s side did something they have never done before. A 2-2 draw with Sassuolo in Reggio Emilia constitutes their first point on the road this season. In mid-April.
Once again the hero was Diabate, Benevento’s gentle giant. The 29-year-old Mali international did not receive anywhere near the same fanfare as Sandro and Sagna on his arrival down south this winter. He could boast about finishing top scorer at the 2012 African Cup of Nations. But the spotlight instead fell exclusively on a former Brazil international midfielder and an ex-City and Arsenal full-back with the aspiration of still making France’s World Cup squad leaping aboard an apparently sinking ship.
No one has done more than Diabate though to keep Benevento afloat and perpetuate a strange sense of wondrous curiosity in this team. Loaned from Osmanlispor in Turkey for €200k, he has scored seven goals in six appearances. That’s as many as Lorenzo Insigne has put away all season for Napoli.
His first at the Mapei Stadium on Sunday was a thing of beauty. It came from a goal kick. Diabate wrestled with a Sassuolo defender to bring the ball down. He knocked it on, got it back and then lobbed the `keeper. The finish was so accomplished Bergkamp would have been proud of it. And yet, to look at, the 6’4” Diabate is one of the most ungainly, inelegant players you’ll ever see. His second goal is more of what we’ve come to expect from him; sliding to get onto a cross on the edge of the six-yard box.
It was his third consecutive brace. The last player to do that in Italy was Dario Hübner 16 and a half years ago. Adding to the incredulity of it all was the inability of anyone else to score in Serie A. There were five 0-0s for the first time since October, 2011. Roma, Lazio, Inter and Atalanta, Napoli and Milan all drew blanks. Bet they all wish they’d had Diabate.
“We’d probably have a few more points if we’d had players with Cheikh’s desire all year,” de Zerbi said. “I’d love all my players to be like him.”
It’s not hard to see why. Diabate is averaging a goal every 40 minutes, an extraordinary ratio when you consider he is playing for Benevento. Chances are few and far between even with a coach as expansive as de Zerbi on the sidelines.
Those seven goals of Diabate’s have come from just 10 shots on target and de Zerbi is right. No one down the bottom has a strike partnership wreaking as much havoc as Benevento do at the moment with Diabate and Pietro Iemello. Sassuolo do on paper with Domenico Berardi, Khouma Babacar and Matteo Politano. But the fact remains they have scored just nine goals at home all season.
“I would pay to go back in time and start the season with this group of players,” said de Zerbi, who replaced Marco Baroni at the end of October. “On the pitch and mentally, they’re great. They live for their work.”
Much as I hate to break it to him, there is no Tardis, no DeLorean. San Gennaro may be from Benevento but even he can’t save them now. Nor can Diabate.
I’ll miss them. Some won’t on account of a desire for a more competitive Serie A.  Benevento were good at being bad for a long time, it’s true. However they won’t go down as the worst team ever to play in the top flight. They already have a better point-per-game ratio than Brescia finished the 94-95 [12] campaign with not to mention Ancona in 2003-04 [13].
Think about it. This team could have thrown the towel in months ago. It feels like the writing has been on the wall since the beginning of the season. Instead Benevento keep going. Admiring that isn’t celebrating failure. It’s having a heart. Benevento have made us laugh. They have made us smile. They will make us cry. Ultimately that’s what life is all about. As Zdenek Zeman once said: “Sometimes the losers teach you more than the winners.”
By James Horncastle
About
admin